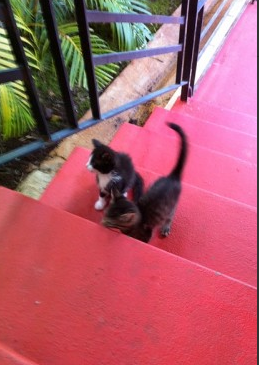 I love dogs, mostly I love animals in general but I am not particularly a cat person. I’ve never had a real pet (other than a fish) because I travel so much and because I’m not good at cleaning up after them. My fish was a total character (who thought an angel fish could have so much personality!) and when she died several years ago, I was devastated and didn’t want to go through the death of a pet again.

Last week, my friend’s daughter brought home a box of kittens that had been left to die. I happened to be at their house she came home with the kittens. They were supposed to be left at the humane society but when the daughter was told they were going to be destroyed because they’re so young, she brought them home instead, much to her parents’ dismay. When we all looked in the box, of course everyone melted and a space was set up for them.

I contemplated bringing one home and rejected the idea immediately as I know nothing about cats, let alone four week old kittens who have been taken from their mother prematurely. One week later the cats were still at my friend’s house and for some reason, I decided I should take one. So I did, named her Makana, which means gift, which is what I felt she was to me. It was a traumatic couple of days trying to litter box train her but we got through it. When I could finally let her loose in the house and then loose outside, things got much better. But I still wasn’t sure about this arrangement and was not happy that she was scratching and biting me so much, even if it was only in play. Last Friday night I was ready to return her to my friend. The following night I came home with a second kitten! I brought one of her sisters home to keep her company and named her Hehoa, which literally means companion. I thought a second kitten would be either a stroke of genius or madness. It took two days to litter train her and as of now, everything is going great. They play with each other, inside and outside and they hang with me when I let them. They are not only the cutest, they are also the coolest! So we shall see where this goes from here…. It’s hard to take a picture of kitties, they don’t stop moving unless they’re asleep.