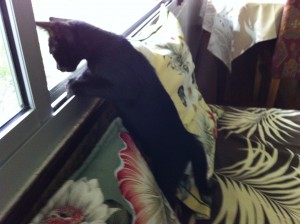 I had been thinking for a few months that my kitty, Makana, was ready for a new feline pal. We were both traumatized when her sister was killed by the neighbor’s dog last July, and more than one animal whisperer told me shortly thereafter that Makana didn’t want another cat friend, at least not yet. That was about 10 months ago and while Makana is very independent, she is young (a year and a half) and still likes to play. Playing with me is not nearly as fun as when she and her sister, Hehoa played, although she likes when we stalk each other inside the house.

To make a long story short, a friend came to visit from the mainland last weekend and when I happened to mention I was thinking about getting a kitten friend for Makana, the next thing I knew, we were at the Humane Society! I didn’t really have any idea if Makana wanted another cat in the house and wondered how much I was projecting her desires based on my own likes and dislikes. I looked at the kittens with trepidation, knowing this could backfire if Makana did not want a feline companion. There were plenty to choose from, including several with my favorite black and white coloring, but those kittens weren’t as personable as the black one with green eyes that came and sat on my lap and started purring (black was not even one of my preferred cat colors!). Still being unsure about this idea, I signed the papers and brought him home with me. He is a 2 month old male and I named him Kūlia, which means stand tall, lucky and distinct beauty (and the last pane in I Ku Mau Mau) . The Kū part of his name is for male energy, and I like the kauna of a black cat whose name also means ‘lucky’.

So far they’re still checking each other out from a distance although with each passing day, that distance gets smaller. The advice I read online about introducing a kitten to a home that already has a cat seemed a little over the top as far as isolating the kitten for several days, etc. I’m dreading going through kittenhood again with all the climbing on table tops, knocking things over, worrying about him getting stuck in something. I already accidentally shut him in the fridge when I didn’t see him climb in before I shut the door! And soon enough he will want to go outside, but that’s definitely not going to happen until he and Makana are friends, and hopefully he will figure out to stay out of the yard with the dog. In the meantime, the Hawaiian Humane Society is great place and I hope all the kitty cats there, old and young, find homes.