After the 1986 election, Senator Inouye called me and asked me to be his professional staff for Native Hawaiian issues on the Senate Select Committee on Indian Affairs, to which he had just been appointed chair. I had lost my previous job when my boss lost his bid for governor and was already co-producing a television series on Native Hawaiian issues in Hawaiʻi. I asked Senator Inouye if he could wait until the following June for me to start, and he did.

During that period between 1987 and the time I returned home again in 1992, to work on his Honolulu staff before branching out on my own, the committee passed significant legislation that directly benefitted Native Hawaiians. The Native Hawaiian Education Act, The Native Hawaiian Health Care Act, The Native Hawaiian Revolving Loan Act, the Native Languages Act and the Native American Graves and Repatriation Act were among the significant bills that I staffed during this time, each one of them the law of the land today. At the markup of the Native Languages Act legislation in his committee, I was staff for the bill and was about to respond to Senator Slade Gorton’s criticism of perpetuating Native American languages when Senator Inouye, who was chairing the committee took control and responded. He gave the most eloquent and extemporaneous speech I have ever heard. Sitting in awe, I listened to him undress Senator Gorton, first his clothes, which he piled up neatly, then his skin, then he took his bones apart and laid them in a precise little pile. There was nothing left of Senator Gorton, and while he still didn’t vote in favor of the bill, it passed overwhelmingly by the rest of the committee. It was moments like this that I will never forget. He was one of the smartest men I have ever known, even when he lectured me one day, as I sat with my arms and legs crossed, refusing to look at him, about why the military needed Kahoʻolawe for target practice. He changed his position later (not because of me) and was instrumental in returning the island to the Hawaiian community.

The last story he told me when I visited him in Washington in July, 2010, was about his encounter with a “shark god”. Here is the story as I wrote it out after our meeting: When he was in the Hawaiʻi territorial legislature, Kamokila Campbell came to him for help. She was having problems with the IRS because she was giving lots of money away to kupuna. She said she couldn’t pay him to help her. Even though they were on opposite sides of the Statehood issue, he said he wasn’t expecting pay and would help her. He fixed her problems and after, she used to call him once or twice a month. He went to visit her at Lanikuhonua and she explained to him that this place was very sacred because it was the home of a shark god. She took him down to the water and he waded in. A shark swam in the cove and came within about 10 feet of him and stopped. When the old women who were gathered saw the fin they started wailing “auwe”. He stood, the shark stayed awhile, then turned around and swam away. He thought 2 things: it’s too shallow for the shark to come closer and bite me, and I better not move or I’ll cause a frenzy. After the shark left, Kamokila told him that it was a blessing. My take on his story, as I told him after listening to it and its amazing similarity to the opening of my book, “Between the Deep Blue Sea and Me”, which I had just given him, was that it was one great leader greeting another.

Aloha ʻoe, Senator, and mahalo for your inspiration, for your brilliance, and for the gift of being able to work for you.

Lurline McGregor, a local screenwriter and film producer, can now add another title to her list of credits: award-winning author. McGregor spent two years writing her 2008 novel Between the Deep Blue Sea and Me; this year, it won the American Indian Youth Literature Award for Best Young Adult Book. 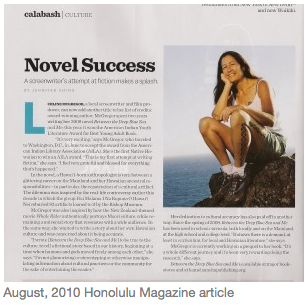 “It’s very exciting,” says McGregor, who traveled to Washington, D.C., in June to accept the award from the American Indian Library Association (AILA). She’s the first Native Hawaiian to win an AILA award. “This is my first attempt at writing fiction,” she says. “I feel very grateful and blessed for everything that’s happened.”

In the novel, a Hawaii-born anthropologist is torn between a glittering career on the Mainland and her Hawaiian ancestral responsibilities—in particular, the repatriation of a cultural artifact. The dilemma was inspired by the real-life controversy earlier this decade in which the group Hui Malama I Na Kupuna O Hawaii Nei reburied artifacts loaned to it by the Bishop Museum.

McGregor was also inspired by how the New Zealand-themed movie Whale Rider authentically portrays Maori culture, while remaining a universal story that resonates with a wide audience. In the same way, she wanted to write a story about her own Hawaiian culture and was concerned about it being accurate.

“I wrote [Between the Deep Blue Sea and Me] to be true to the culture, to tell a fictional story based in our history, beginning at a time when humans and gods moved freely among each other,” she says. “I’m not glamorizing or stereotyping or otherwise manipulating information about cultural practices or the community for the sake of entertaining the reader.”

Her dedication to cultural accuracy has also paid off in another way: Since the spring of 2009, Between the Deep Blue Sea and Me has been used in school curricula, both locally and on the Mainland, at the high school and college level. “It shows there is a demand, at least in curriculum, for local and Hawaiian literature,” she says.

McGregor is currently working on a prequel to her book. “It’s a whole different journey and it’s been very rewarding doing the research,” she says.

Between the Deep Blue Sea and Me is available at major bookstores and at kamehamehapublishing.org. 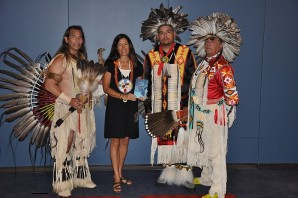 The American Indian Library Association gave out its awards this past June 28th for youth literature. My book, Between the Deep Blue Sea and Me, won for best Young Adult Fiction.

My publisher, Kamehameha Publishing, sent me to Washington, D.C. to receive the award in person. It was a great trip and a fun ceremony, fun because the Piscataway Indian Nation Singers and Dancers, who offered a cultural presentation, invited the audience up to participate in two dances! Itʻs always nice to visit Washington, where I lived for almost 15 years. Thanks to Jim McCallum for the photo.

BETWEEN THE DEEP BLUE SEA AND ME by Lurline Wailana McGregor (Kamehameha Publishing, $15)

Like the lapping of waves on a shoreline, “Between the Deep Blue Sea and Me” enthralls slowly, gently, undeniably.

It’s an absorbing tale that one can read in a night and, like J.K. Rowling, suggests magic, ghosts and goblins, the latter in the form of prophetic earthquakes. 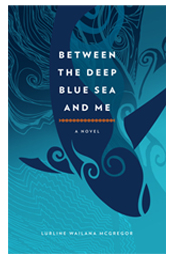 In the voice of darkness, birds stirred with anticipation. The approaching daylight separated sky from earth. By the time the first rays of the sun reached the top of the Ko‘olau Mountains, the birds were already in full chorus, celebrating the arrival of a new day.

On the leeward coast of O‘ahu, a Hawaiian woman, ageless as the ocean, stood in the mystery, ready to carry out her role in the morning ceremony. Water lapped as the tide rose. Into the darkness, facing the intense calm of the water, she began to chant. The primal sound of her voice was filled with the power of those who came before her. Her song carried out to sea.

So begins award-winning filmmaker Lurline McGregor’s first novel, Between the Deep Blue Sea and Me.

Turning her cinematic eye to a story that inherently resonates with so many of us, McGregor delves into what makes a native person native. Expanding upon the question of nature versus nurture, she tells the tale of a woman – Native Hawaiian by birth, western by upbringing – who is forced to confront the dichotomy of her indigenous past with the realities of the 21st century. Read Complete Article