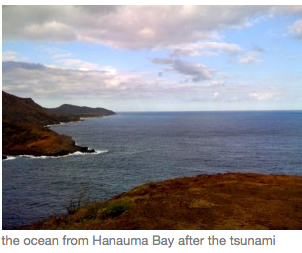 The ocean ebbed and surged but not enough to cause damage. The tv reporters earned their pay and Kirk Caldwell got some free airtime as acting Mayor, an opportunity I’m sure he was happy to have as he waxed on and on about the awesomeness of nature and how great everybody was to evacuate when they were told to do so. I watched the ocean from my house as it filled with boats that moved far enough out to sea to theoretically escape damage should a big wave hit. I also watched the coverage of the approaching wave(s) on a variety of local stations, including CNN, which was carrying the same coverage as the local stations. In other words, the whole country (can’t speak for what the rest of the world was watching) was poised, watching and waiting for the big wave to hit Hawai’i.

I’m sure many of us, especially those of us who live here, were visualizing the images of disasters we’ve seen on tv, like the recent ones in American Samoa and Haiti, and superimposing them on our own beaches and homes. I can’t say it wouldn’t have been cool to see a giant wall of water rush in but considering the consequences, I’m grateful it didn’t.

After the tsunami scare passed I decided to salvage what was left of the day and ventured out to Hawai’i Kai to meet some friends for a hike around Hanauma Bay. The freeway was still relatively deserted and people weren’t going all that fast. The feel was somber, as if we were all reminded of our mortality.

We are left with much to be grateful for that the tsunami didn’t hit our islands with any severity. Mahalo e ke akua for that and for all the prayers everyone sent us to help to avert disaster. In the meantime, let’s not forget about the people in Chile, who are still in the throes of disaster. Maybe now the news will focus on them since there is nothing further to report about us.