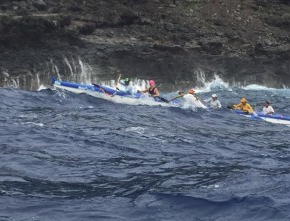 Another regatta paddling season has come and gone, and notwithstanding the typical drama, it was a good year and my crew and our club, Hui Nalu Canoe Club, did well overall.

I was invited to be on a crew to do the 25 mile Dad Center race, which starts at Kailua Beach, goes around Makapu’u cliffs and Kawaihoa Point, and finishes at Kaimana Beach. It is the most exciting and funnest of the long distance races. The other races, including the Moloka’i to O’ahu outrigger canoe race, are mostly just long and for the most part, flat water, or at least, can be. In any event, there are no challenges of going around cliffs, daring to get as close as possible to the ocean crashing on the steep and unforgiving walls to surf the backwash. Having a great steersperson is a must for this race, especially one who knows the nuances of the particular breaks and currents along the way and trusts the crew – as the crew trusts the steersperson – to be able to paddle the fastest (i.e. hairiest) possible course.

I was flattered to be on this strong crew, especially considering the average age was about 4 years younger than me, which, when one starts getting older, matters (unless, of course, you are a superstar athlete). We did well, no mistakes, came in 17th overall out of 48 crews that started the race. I got to paddle the most exciting parts.

While this is still my favorite race, it’s entirely possible that this may have been my last Dad Center. Why? Probably for the same reason I have no future desire to run a marathon – or even a 10K, or do any long endurance race that requires a great deal of training, of endurance, of focus and determination. It’s not that I’m not still physically capable of doing it, I simply don’t have the motivation. Once upon a time, I was absolutely driven to do these long competitions, and not just to do them for the sake of participating, but to excel.

I tend to think age has a lot to do with it, which is probably why I was one of the oldest people on the crew – my peers have lost interest. I suppose it’s a good thing that the mind has figured out that the body may be slowing down, no matter how willing the body may be. I look back on how excited I used to get about this race and this year, in spite of a great crew, didn’t feel it the way I used to. This isn’t to say that I didn’t have a good time (I did) or that I would seriously never do it again (always depends on the crew!). But it is to say that this is one way I know that I am starting to recognize and accept my limitations, or at least the limitations that my mind wants to put on my body. As I have noted before, paddling is a microcosm of life, and certainly there is a take away from this recent race experience. The drama doesn’t always have to be about the crew, it can be internal as well.