Haʻikū Stairs, otherwise known as the Stairway to Heaven

This past Sunday morning at 2:30 a.m. I met a friend to drive to a locked gate at one of the entrances to the private property where the trail begins that leads under the H-3 freeway to the base of the Haʻikū ladder. The locked gate may prevent cars from entering but there is a well worn foot path around the side of it. While waiting for the others in our group to arrive, two groups came in to hike the stairs, which finally convinced me that this was not just a rude joke to get me out of bed at 2 a.m.! The reason for the early start is that a guard is posted at the foot of the latter to prevent people from going up. The guard used to start work at 5 a.m., but evidently when hikers figured that out and started coming earlier, he started coming an hour earlier. We therefore had to get past the guard station by 4 a.m.

It was a moonless night but it was so overcast and raining occasionally that it wasn’t pitch black and our headlamps were adequate. The only problem was the cutoff from the road to the trail was obscured by night and a bamboo thicket, so we ended walking around for almost two hours before we found a different way to get to the base of the stairs. Too late, the guard was on duty and we were already the third group that morning to be turned back (the two groups before us had come from a different direction and had spent even longer trying to find the guard station).

The one time I climbed the stairs before the City and County repaired them several years ago, many of the steps were missing, so I held onto the fixed ropes, which is always a bad idea as one never knows how old or sturdy such ropes are. The stairs are very vertical, probably ascending at an 80-85 degree angle, so it is a very long and possibly fatal fall if one slips while high up. My friend assured me the hand rail was now solid so no problem.

The top of the ridge is the providence of the akua. The time I was at the top before, it was a very spiritual experience to be at one with the mist, the winds, the vegetation that is unique to the tops of these mountains. And of course, the view across the top of the Koʻolau range. I don’t feel badly about not climbing the stairs this time because they surely would have been slippery and visibility at the top would have been completely obscured. Instead I mahalo nā akua and nā aumākua for preventing us from doing something totally and insanely ridiculous!

It was less than two weeks ago that I, like many people, was stunned to hear on the ten o’clock news that Ka’au McKenney’s body had been recovered near Makapu’u lighthouse. It made no sense but the picture they flashed on the screen was definitely him, blue eyes that made up half of his face, a big smile that made up the rest. 45 years young, still so much left to do.

A friend of mine says you can tell whether someone’s life was successful by how many people attend his or her funeral. An insightful but unnecessary measurement. I already knew I would be only one of the many, many people who attended the service for Ka’au yesterday and the scattering of his ashes this morning. Ka’au was a beautiful person and a genuine waterman, and what set him apart from others who are lucky enough to live their passions was his desire to give back to the community. Because of that he will live on, through through his students, through his contribution to the polynesian voyaging community and even in the stars, and we will all be better for it. Mahalo, Ka’au, for your many gifts. Aloha, a hui hou. 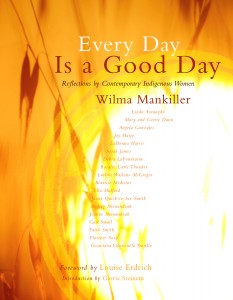 Every Day Is a Good Day – Memorial Edition

08.05.2011 Blog
0 Likes
Fulcrum Publishing, which published the first edition of Every Day Is a Good Day in 2004, recently released a Memorial Edition of this beautiful book. The only differences appear to be a new cover design and the addition of a foreword by Louise Erdrich. Maybe that speaks to the fact that that no other changes could have added meaningfully to this already-perfect book.

Since I am one of the women whose reflections are included in this book, my credibility may be questioned if I say too much about what a great book it is, so instead, I’ll critique myself, which I’m very good at doing. I always cringe when I read what I have said in interviews but that is not so in this case. In part it may be because Wilma gave me a chance to revise my responses, which I did, but I think that is only a small part of it. Wilma asked me questions that went beyond what I might have been thinking that day. The questions were deep. They went to the core of my beliefs, to my relationship to my Hawaiian culture and to what my version is of a meaningful life. I look at my bio at the back of the book and that has changed radically since 2004 but not my world view or core convictions. That is probably why I would not change a word today, over 7 years after saying what I said that day. I think the same is probably true for every other women interviewed in this book.

I mention in a blog that I wrote shortly after Wilma passed (see below) that this book was based on individual interviews with each women featured, we did not sit in a circle and have a free flowing discussion, yet, because of the skillful way Wilma wove our thoughts together, all our spirits are, in fact, sitting together, having this conversation.

I hope the collective wisdom in this book is helpful to anyone looking for inspiration, for meaning, even for answers. I am humbled to be in the company of these other women who are carriers of their cultures, who are deeply profound and amazing individuals. It certainly inspires me to be a better person. Mahalo ia ‘oe, Wilma.

The Kamafiki Crew, as we named ourselves, went on our first overnight sail this past Saturday, a moonless night so we could see stars. Basically there are six of us on this crew that means ‘magic’ in Samoan, according to Captain Buddy.
It’s a word he uses when something suddenly fixes itself or does what it’s supposed to. None of us could find it in a Samoan dictionary and the one Tongan one of us asked had never heard of kamafiki. When you think about it, it makes sense that there wouldn’t be such a word as magic, at least in a Polynesian cultural context, because magic is sorcery. Anyway… we liked the word. The six of us on this crew bonded from training for the Hokule’a world wide sail. We all pretty much started coming to classes at the same time last year and so became friends.

Only four could make it last Saturday but it was enough to set sail. Captain Buddy McGuire has been very generous to teach us and to give us ocean time on his 41 foot sloop. Every sail is a training opportunity, and we are having a crash course in sailing vocabulary as well as how to do everything aboard ship. Preparations are especially critical as it would not be good to get stuck in the middle of the ocean. 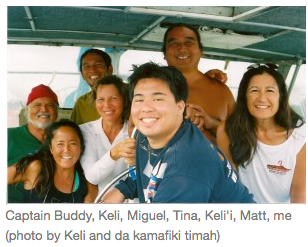 We finally got everything checked, verified that it was all working and headed out. We weren’t going far, just to the sandbar in the middle of Kane’ohe Bay. We got more or less to where we were going and stopped for the night. I didn’t think about the fact that we were going to have to take turns doing ‘anchor watch’. Even though our anchors were pretty firmly set, we wouldn’t want to accidentally drift during the night, so after dinner we paired off and started our watches. This was the part we had all been waiting for. A clear sky on the ocean, away from city lights, where we could observe stars. We spent much of the time looking at our star charts and comparing them to the sky. It was exciting to actually see stars and constellations that are too difficult to see from land. Leo and Scorpio were the clearest constellations I saw that night as well as many individual stars. It was the lessons in the Planetarium coming to life. The steady breeze and rocking of the boat made it feel like we were moving, although we weren’t. I thought about my Scottish great grandfather, Captain Daniel McGregor, who captained the ferry that went back and forth between Hau’ula and Kane’ohe in the late 1800s. I thought about my Hawaiian ancestors, who must have also known these waters. There’s lots to think about at night while keeping watch aboard ship. It wasn’t as hard as I thought it would be to sleep and get up every two hours – and stay awake – although I don’t know how many nights in a row I would be able to do it. We were all pretty exhausted the next day, which was a beautiful day for sailing out into the deep blue, which we did.

As far back as I can remember I have wanted to spend the night at sea in something smaller than a passenger liner, something more closely one with the elements. I finally got my wish and I wasn’t disappointed. Now I look even more forward to actually sailing at night on Hokule’a, navigating by the stars. That will be next.