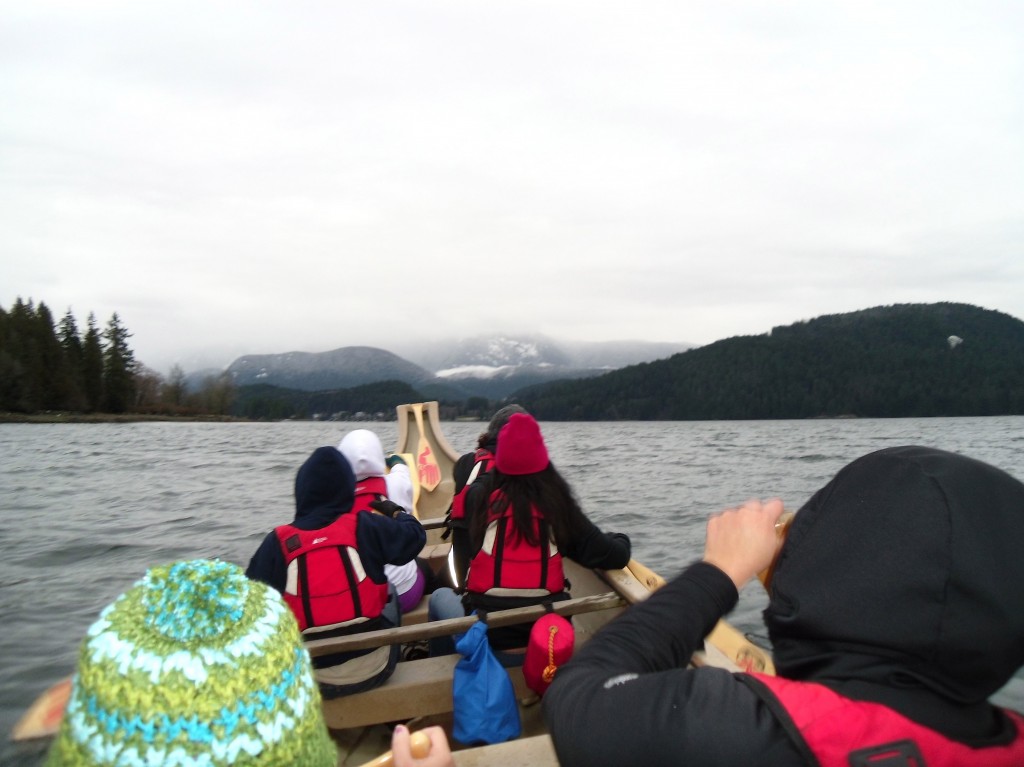 What an honor to have been included in a ‘canoe pull’ in an Indian canoe last week. Mostly, it was an adventure. 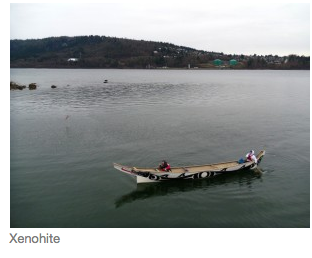 I woke up in Vancouver, B.C. the morning of the paddle to snow on the ground and a heavy gray sky, and wondered if we were really going to go. While I could have been talked out of it if no on else wanted to go (i.e., if saner minds prevailed), my hosts, who were members of various Northwest Coast Indian tribes, were more than happy to bring the canoe out from its winter hibernation and go for a paddle, or ‘pull’, as they call it. No matter that the temperature was barely above freezing.

What I loved and appreciated most about the experience was learning the paddling protocol. We picked up Wes Nahanee at his home on the Squamish reserve in North Vancouver, where the canoe also lives during the winter. Wes is a very accomplished Squamish-Hawaiian waterman (among many other things I was not surprised to discover when I googled him later) and was our ‘skipper’. He introduced us to the canoe, Xenohite, and instructed us in the proper protocols for paddling, which even included protocols for getting in and out of the canoe, how to hold our paddles, and what the different commands are while in the canoe. Paddling in a Hawaiian outrigger canoe is different from paddling in an Indian canoe, where paddlers sit two abreast rather than single file, so one paddles only on one side. We switched positions with the person next to us to paddle on the other side only once during the time we were on the water. Changing places can be tricky because there is no outrigger to stabilize the canoe, so only one seat at a time trades places. Wes sang traditional canoe songs as we paddled, some of the women also knew canoe songs that they were happy to share. That helped to take my mind off the fact that my hands and feet were completely numb and my left arm was about to fall off as I am not used to paddling more than fifteen or so strokes on one side before switching over to paddle on the other side.

My memory of the day was not about the cold but rather about everything I learned about paddling an Indian canoe. Protocol is everything on a canoe journey. At the heart of protocol is respect– respect for the canoe, for the ocean, for the land, for the winds and all the elements of nature, for the ancestors, for the gods, and for each other, and that is what makes the experience so powerful. As I mention in most blogs that I have written about canoes, paddling is a metaphor for life, and I believe the metaphor is no different for Indian or Maori or any other culture that still has a canoe tradition. The renewal and continued practice of our canoe traditions have done much to heal our people and our souls and to move us forward together as indigenous people. For that, we are blessed.