I said in an earlier blog that I started this website because I wanted to make commentary on actions and decisions that take place in the community (mostly by politicians, of course). 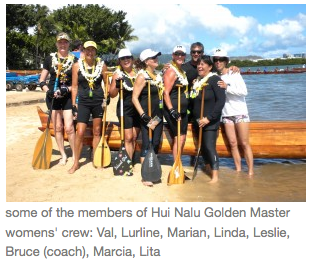 Then I chickened out as I would not want to say something that could come back and haunt me. Even if I don’t name names, the likelihood of people knowing whom I am talking about is higher than if I lived in a larger community and so I therefore choose not to insult anyone as people tend to take things more personally in a small community. They also have long memories.

Paddling is no different. I would love to give examples about how paddling mirrors life – the highs, lows, dysfunctions, personal agendas, etc. But then I don’t want to lose my seat in the canoe if someone thinks I may be talking about her (or him), takes it personally, and blabs to the coach that I have a “bad attitude”.

Having said all that, last weekend at the Hawai’i Canoe Racing Association state championship canoe races on Maui, my crew got disqualified for moving into the next lane and interfering with another canoe. There was a certain irony to this and thinking about it inspires me to at least make some general observations about the world of outrigger canoe paddling.

A crew consists of the six people in the outrigger canoe as well as those waiting on shore for their turn to paddle. One must leave their ego, whatever baggage they may be carrying from the day, whatever they may think about other people in the canoe, etc. on the shore before setting out, otherwise the canoe will not move forward. In my experience I have discovered this to be very true. One can – and should – do everything one needs to do to prepare for canoe practice, which includes aerobic and weight training and even visualizing the technique that the coach wants everyone to follow. In the canoe one must stay focused and always do one’s best. Beyond that, there is nothing one can do about the coach’s decisions or anyone else in the canoe other than hope that everyone shares the same goals and motivation. All outrigger canoe clubs have their own issues (more familiarly known as ‘paddletiks’) and in the end, it’s best to ignore everything beyond your control and just paddle. 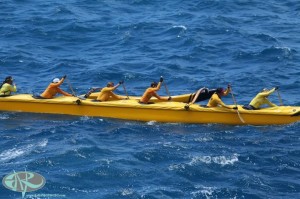 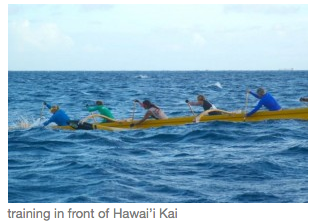 The seven vaka are docked at the Marine Educational Training Center on Sand Island this week where the crews are all staying as well. They are giving tours of the vaka for anyone who wants to come down and see them and talk to crew members. What an inspiration and a dream to be able to sail on one of these beautiful vessels. The large solar panels provide all the power they need, including for their propellors that they use only when they pull into dock so they donʻt have to be towed. 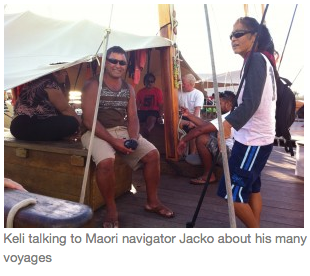 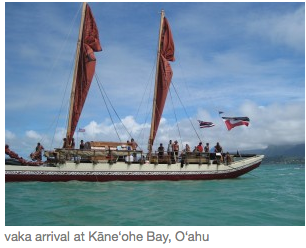 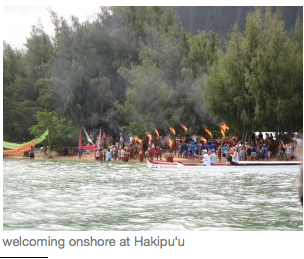 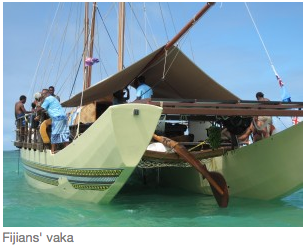 Check the website about the Pacific Voyagers at http://www.pacificvoyagers.org/ 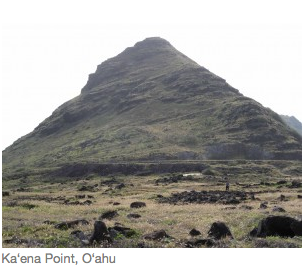 In 1871, Lot Kamehameha, great grandson of the Kamehameha I, proclaimed by royal decree that June 11 would be a known as Kamehameha Day, and every year on this date the people would celebrate the unification of the Hawaiian Islands. June 11 is an arbitrary date, simply a day chosen to remember that a powerful warrior once walked in our midst, one who was not any less brilliant or skilled than any of the great conquerers in world history, and that he brought the Hawaiian Islands under one rule and and that we should celebrate his achievement every year with games and parades.

Before Kamehameha, the Hawaiian Islands were each independent kingdoms that fought back and forth as different rulers endeavored to expand their domains. Chiefs from neighbor islands had always been envious of Oʻahu’s wealth, of our fresh water, our fertile soil, the abundant sea life inhabiting our shores and surrounding ocean. Oʻahu had the highest and some of the most visionary and benevolent chiefs of all the islands, and under them the Kingdom of Oʻahu flourished for centuries, successfully warding off attempted invasions by neighbor island chiefs. Oʻahu was finally conquered in the late 1700’s by Kahekili, a powerful Maui chief and, according to Kameʻeiamoku, father of Kamehameha. He achieved this victory through treachery and a determination to kill whoever got in his way. As invaders and conquerers everywhere do, Kahekili replaced the Oʻahu chiefs and konohiki with his own Maui chiefs who were loyal to him, but who were not particularly good to the new people they now ruled. The Oʻahu chiefs planned a revolt and in turn Kahekili committed genocide, not only of the Oʻahu chiefs but of the men, women and children of Oʻahu as well. Kahekili’s son, Kalanikupule, inherited the Oʻahu Kingdom after his father’s death but lost it to the superior forces of Kamehameha (superior, as in western firearms and military strategies). By this time the population of Oʻahu, including its armies, were decimated, and Kamehamehaʻs bloody victory, which culminated in pushing most of the the remaining Oʻahu warriors over the Nuʻuanu Pali to their deaths, was decisive. Kamehameha then exercised his prerogative as conqueror to replace the Maui chiefs on Oʻahu with the appointment of his own loyal chiefs to positions of power and to distribute the lands as he saw fit. Unlike Kahekili, Kamehameha was much more just towards the people and so they were more accepting of him than they were of their previous conqueror.

Kamehameha descendants became the heirs of Hawaiian lands, which they mostly lost to our next conquerer, the United States, who then installed their own people to rule us. Who is to say what would have happened if Kamehameha had not unified the islands. Maybe the Hawaiian Islands would still be independent to this day, or maybe different islands would be under different flags, like Samoa and American Samoa.

Oʻahu was unified into an island kingdom in the early 1400’s, which is almost 400 years that our island was a nation before we lost our sovereignty to Kahekili. Our Islands became an independent nation under Kamehameha and his descendents for 83 years until we lost our collective sovereignty to America, which has now ruled our islands for 118 years. And so on Kamehameha Day I will celebrate the great chiefs of Oʻahu, who include Māweke, Mā’ilikukahi, Kūkaniloko, Kakuhihewa and their descendants, all of whom who are long gone.